SPAIN UNCERTAIN: THE “FRANKENSTEIN” GOVERNMENT OF THE LEFT

Mary Shelly’s brilliant Gothic novel Frankenstein introduced us to, besides to one of the most terrifying creatures of universal literature, to this genre of the unknown, of the uncertain and of the obscure which was to reach its heyday in the 19th century, with other supreme oeuvres such as Robert L. Stevenson’s The Strange Case of Dr Jekyll and Mr Hyde or the stories of Edgar Allan Poe. All of these breath-taking terror stories have cause such an impact in the history of literature not because of the madness of their characters but because of the atmosphere of unease and uncertainty they created. Since June 1st 2018, it seemed that Spain descended into one of these uncertain Gothic stories as the strong conservative government of Mariano Rajoy and the Popular Party (PP) who had, only a week ago, seemed to have secured power after passing the Budget in the Chamber of Deputies by a very adjusted majority (176 votes out of 350 MPs), were ousted from power by a no-confidence motion put forward by the leader of the Spanish Socialist Worker’s Party (PSOE) Pedro Sánchez.

Nobody could have expected, Mr Sánchez least of all, that the centre-right cabinet which survived 316 days of political stalemate in 2016, and which has been able to consolidate Spain’s economic recovery and confront the secessionist movement in Catalonia, as well as several corruption scandals, whilst having to govern with a parliamentary minority (134 MPs), would have been swept away so swiftly. As a verdict for the polemic corruption scandal of the Gürtel affair was reached last week, sentencing former PP municipal leaders to prison, Mr Sánchez presented a motion of no-confidence which was to be voted May 31st and June 1st. According to the Spanish Constitution, if a motion of no-confidence is supported by the absolute majority of the Chamber (176 MPs), the government will be ousted from power and the candidate put forward by the party presenting the motion (the PSOE, in this case) would be considered to have the confidence of the deputies and will hence automatically become prime minister.

Apparently, the motion wouldn’t succeed. After the elections of 2016, the PSOE holds only 84 seats in parliament, less than 25%. The only plausible parties to support a anti-PP no-confidence motion were the anti-austerity left-wing populist party Podemos, the Catalan secessionist parties (ERC and PDeCAT), and other left-wing nationalist organisations (the Communist Basque EH-Bildu, the Valencian Compromís and the Canarian Nueva Canarias). They all added 175 MPs, still 1 vote away from the required majority. The only possible votes could come from the centre-right Nationalist Basque Party (PNV) who had just voted in favour of Mr Rajoy’s Budget last week. 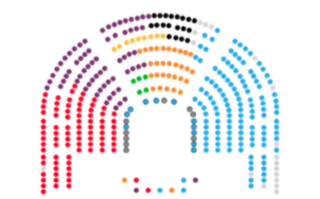 The comparison of Spanish politics with Gothic literature isn’t just mere coincidence. The PNV, for example, has played the role of Dr Jekyll and Mr Hyde, two different personas within one same body. After some tense negotiations with the PP, after the centrist and anti- nationalist Ciudadanos (C’s) party, which supports the PP, threatened to jeopardised the Budget if the government made concessions to the nationalists, the PNV finally decided to support the Budget which granted long-term stability for Mr Rajoy’s government. On May 24th, thanks to the votes of the PNV – which, by the way, weren’t free (an important percentage of government expenditure was destined to the Basque country) –, the Budget obtained the approval of the Chamber of Deputies. On June 1st, only eight days later, the PNV voted in favour of Mr Sánchez’s no-confidence motion and toppled the PP from power, alleging, like many other parties, reasons of “democratic hygiene” against the PP’s corruption. How did we get here? Corruption is too simple an answer. The PNV has voted in favour of the PSOE who holds one of the greatest corruption scandals of modern Spanish history in the Andalusian region (the “ERE affair”, funds destined for unemployment benefits being embezzled); PDeCAT, who also voted for “democratic hygiene”, has been involved in the scandalous “3% affair” (3% of the public budget of Catalonia being embezzled); Podemos is under investigation for receiving murky funds from the Venezuelan regime. Sadly, corruption is almost omnipresent in Spanish politics hence it cannot be the reason the PP has been ousted from power.

All parties have their own pragmatic reasons.

The Catalan secessionists hope a PSOE government to be more lenient towards the Catalan affairs after the non-violent coup they starred in October 2017, proclaiming independence after an unconstitutional referendum. Socialist leader in Catalonia, Miquel Iceta, already spoke in late 2017 of pardoning the Catalan leaders who were about to be indicted for rebellion (a crime punished with a minimum of 25 years in Spain). Furthermore, it has become a truth universally acknowledged in Spain that the “soft” application of Article 155 of the Constitution – which allowed Mr Rajoy, in 2017, to intervene the Autonomous Community of Catalonia – was the work of the PSOE. (This “soft” application was based, for example, on allowing the Catalan public television to remain in the hands of secessionists, which have transformed it into a propaganda machine). Furthermore, Catalan secessionists prefer a weak Socialist government which, in essence, “owes them” having supported the no- confidence motion, instead of centre-right PP government supported by C’s, the centrist party which has turned against all nationalistic privileges and which won (although without absolute majority) the December 2017 autonomic election in Catalonia.

Nationalists (both the extremist Catalan secessionists and the moderate PNV) have been shivering with the last election polls which predict a sweeping victory of C’s, achieving around 90 MPs. Was C’s to gain power, many believe that strong anti-nationalistic policies will be developed, policies which are a bit too much for both PSOE and PP governments which have historically governed with the support of small nationalist parties. The PNV fears the growing influence that C’s has upon the PP, which has been crumbling in election polls. In late April, a leading PNV member stated that they would accept the PP’s budget in order to ‘prevent C’s from reaching la Moncloa [Spanish presidential palace]’. Therefore, a Socialist weak government (even though it is supported by extreme left-wing populist and the Catalan secessionists – which, on the other hand, the PNV has always been lenient about) is convenient to the interests of the PNV as well.

Furthermore, in his speech during the no-confidence motion, Mr Sánchez guaranteed that, once in power, the PSOE would allow the PP’s Budget to prosper and would use it to govern. This was a great shock for everyone: one of the reasons the PP had had to engineer such a complicated arithmetic majority in parliament to pass its Budget was because the PSOE had claimed the budget ‘not to be what the Spanish society is looking for’6 and was ontologically against it. Yet, as said before, the Budget gave great financial advantages to the Basque country: the PNV wasn’t going to relinquish their gains; the PSOE hence swallowed the bitter pill of the Budget they had considered anti-social and perpetuator of social inequality.

Mr Sánchez confronts a very difficult future. With only 84 MPs to support him, he will be totally dependent on other political forces in order to pass any legislation. The PSOE, which has always considered itself a pro-Spanish unity party and which has been loyal to the government during the Catalan crisis, is now in the hands of the anti-Spanish and anti- constitutional forces which had put the country on the brink of confrontation in late 2017. Moreover, Sánchez will try govern with the 134 MPs of the PP in the Opposition along with the 32 of C’s.

Spain confronts the political uncertainty of an 84 MP-backed government born over a week and supported by those who are against Spain. Yet, in essence, this all part of the PP’s grand strategy. Sánchez didn’t want to govern: the no-confidence motion was certeainly a bluff he expected Rajoy to take and resign. Rajoy didn’t, and now Sánchez is chained to a paradigm which can destroy his party. The electorate of the PSOE is traditionally harshly anti-PP (it is difficult to find a “grand coalition” consensus between socialists and Christian democrats as in Germany, for example), but it is also bitterly pro-Spanish. Forcing Sánchez to govern alongside Communist Podemos and the nationalists will only erode the PSOE. In the meantime, the PP needs to undergo serious internal reform in order to purge all of the corruption inherited from the PP of the 1990s and early 2000s. This period in which Sánchez will be struggling to govern, and which might destroy him, will grant the PP time to restructure and recover from the weathering of almost seven years in power.

"The youth is the hope of our future." - Joze Rizal