William Reynolds is a 3rd Year War Studies undergraduate. He is interested in maritime history and security and is currently researching a dissertation on the role of the Royal Navy for British policy in the 1970s. Will has worked for the Centre of Military Ethics as a Kings Research Fellow, is currently a researcher for the Kings Middle East North Africa Forum and is head of Operations for the Kings Crisis Team 2017/18.

It is safe to say that those working in defence and foreign policy have had much to concern themselves with when it comes to the actions of Russia. The resurgence of an assertive Russian foreign policy, both in Europe and the Middle East, has caught NATO officials scrambling and politicians worrying over future prospects. Both news outlets and pundits claim a second Cold War is on the horizon, yet despite all this focus on the Eastern ‘Front’ and the proxy warring in the Middle East, very few have focused upon the North Sea.

This radically changed, at least in the UK, in December of this year where the annual RUSI CDS (Chief of the Defence Staff) talk focused heavily upon these Northern waters.[1] With defence cuts on the horizon, whichever threat the CDS decided to focus on could reasonably be inferred to be the primary security concern of the UK for upcoming years. This was then further supplemented on Christmas and Boxing Day where British tabloid newspapers and the BBC itself focused on a ‘recent upsurge’ of Russian naval activity transiting through waters of interest to the UK.[2] It is with this in mind that this short piece hopes to layout the history of this area, the return of Russia and how this may factor into the security calculation of not only the United Kingdom but Europe as a whole.

For many, the Cold War inspires images of spies, the Berlin Wall and ICBMs sitting in their silos. However, popular culture, thanks very much in part to Tom Clancy’s Hunt for the Red October, has further given the role of submarines a place in Cold War History. To a degree, there is truth in this. Soviet submarine technology initially was superior to the Allies thanks to their patronage of ex-German engineers and the capture of much material alluding to the manufacturing of subsurface vehicles which, and as a result, were used to a large extent by both the Soviets and the West playing catch up.

It is for this reason that the North Sea played such a crucial role for NATO. In order for Soviet submarines, of all types be it diesel hunter-killer to nuclear ballistic-missile submarines, to prosecute both their peacetime and possible war times objectives, they would have to get out into the open Atlantic. Thus NATO strategy focused on bottlenecking them in through a series of Chokepoints ranging from Japan to the Dardanelles and Gibraltar to the GIUK (Greenland-Iceland-United Kingdom) Gap. 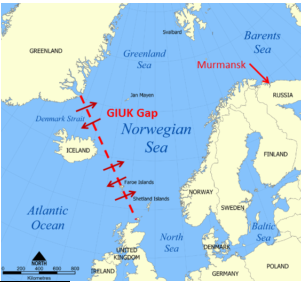 With this in mind, the North Sea, during the Cold War, became the domain of nuclear submarines, carrier battle groups and naval diplomacy in its sharpest form, that being literally chasing your opponent out of an area of interest.

The Return of Russia

This history lesson is all very well and good, but what is the point of it? Whilst much focus has been placed on the Baltics, Crimea, the Ukraine and Russian activity in Syria, the British public rarely looks at actions in the UKs own ‘back yard’, the North Sea. This could be for a variety of reasons; inherent British belief in maritime superiority, the concept of Russia being a cause for concern ‘over there’, and many others. This piece isn’t attempting to deduce that. What is clear, is that Russia is returning to its old playing field.

First one must look at the politics of the navy. The Russian navy has never been the centre of its military policies. Even under Admiral Gorshkov, a pioneer in Soviet strategy and quite frankly the father of the powerful Soviet Navy of the 80’s, the Red Army remained the centre of attention. Yet, in the State Armaments Programme (Gosudarstvennnia Programma Vooruzheniia – GPV) of 2011 – 2020, the Navy received the largest share of the defence budget (25%).[3] What is more surprising is the political ‘affection’ for the surface fleet. Both Vladmir Putin and Prime Minister Dimitri Medvedev have lauded the Navy consistently. However, the Russian Navy’s strength has always lied in its submarine force. Gorshkov tailor made the Soviet Navy of the 70’s and 80’s to directly counter the superior US Carrier Task Forces through asymmetric warfare. He did this through submarines, not vulnerable surface units.

The Pyotr Velikiy being escorted through the Channel by HMS Northumberland

However, surface units provide something which submarines do not. Visible power. As of mid-2017, the Russian Navy possesses six large surface vessels. The Carrier Admiral Kuznetsov, the nuclear-powered Battlecruisers Pyotr Velikiy and Admiral Nakhimov, and three Slava-class Cruisers.[4] These may be Soviet legacy vessels, but they are all still capable of projecting power in a blue-water environment. The deployment of the Admiral Kuznetsov to Syria was not a necessary requirement, yet it was done so anyway. The ship itself was a clear statement of Russian intent in Syria. After all, the US Nimitz-class Carriers and Arleigh-Burke-class Destroyers are products of the later Cold War also and yet they remain the backbone of the United States Navy.

The North Sea has indeed seen increased activity. As mentioned previously, the Royal Navy was forced to escort and keep tabs on four separate Russian ships, one a combatant and one an intelligence gathering vessel, within the space of two days.[5] Furthermore, it is not only the Russian surface fleet that is beginning to make more of an appearance. On the 22nd December US Navy Rear Admiral Andrew Lennon, commander of NATO’s submarine forces, stated “We are now seeing Russian underwater activity in the vicinity of undersea cables that I don’t believe we have ever seen.”[6]. Indeed the activity has caused NATO to reopen a command centre to reinforce SACLANT (Supreme Allied Commander Atlantic) which further infers the amount of activity being witnessed. NATO would not simply reopen a station on a whim.

So Russia has returned to the North Sea. Is it a credible threat? The CDS of the United Kingdom, Sir Stuart Peach, seems to believe so. In his RUSI speech not only did he bring up the threat of Russian maritime actions in the North Sea, but focused upon the idea of underwater cables. These cables control the flow of information. To use a piece of maritime strategic thought, these cables are the new ‘lines of communication’. Whereas this use to mean the travel routes of convoys and shipping, it now quite literally means lines of cables running through the seabed.

A map of submarine cables in Northen Europe

Just looking at the above map one can see that the majority of submarine cables run from the British Isles across the Atlantic. There is much said the of the UK being the ‘Trans-Atlantic bridge’ between Europe and the US. Politically that may be doubtful. But it is quite clear that for communication purposes, the British Isles is vital.

Just one counterfactual secenario of a submarine ‘cutting’ one of these cables could throw the economy into jepordy. This would then have a knock on effect for the rest of the region, as the communications reliant London stock exchange, would inevidbly tank as a result. As Sir Peach put it,

“Can you imagine a scenario where those cables are cut or disrupted, which would immediately and potentially catastrophically affect both our economy and other ways of living if they were disrupted?”[7]

However, whilst this threat is indeed very real, one must holistically analyse the Russians capability. The increased funding of the Russian Navy may not see the advent of more Russian ships on the high-seas. Russia no longer has the workforce or facilities to construct vessels of higher tonnage than a Frigate. Much of that, during the Cold War, came from the Ukraine.[8] Thus the large Cruisers, Battlecruisers and Carrier of the Russian Navy will not see a replacement anytime soon.

Furthermore, whilst Russian shipbuilding capabilites has retained the full capacity to construct submarines of all types, cost is becoming an issue. Sanctions, falling oil princes and the like will increasingly put pressure on shipbuilding. There is a strong import dependance on EU and NATO states for items vital to this sort of work. One figure places machine tool parts at 88% imported from said states and that was only in the domestic sphere.[9] Thus NATO will not have to contend with a Gorshkov level of rearmament for the time being.

The Russians as of now do not posess the capabilites of their Soviet past. However, as we have seen in the Ukraine, Crimea and Syria, they are willing to forgo conventional means of warfare and adopt an asymetric style unique to their own needs. We will not see the large behmoths of the 80’s continuing to stalk the Northen passages. But if all it takes is a single submarine, cutting several cables to cause, NATO should heavily reconsider its policy of Anti-Submarine Warfare in the North Sea. This piece was not meant to gauge whether the Russians would actually commit such an attack, but rather highlight that despite seeming distance between the Western states and the Red Army, all it could take is a single maritime asset to critically injure the alliance and the EU.